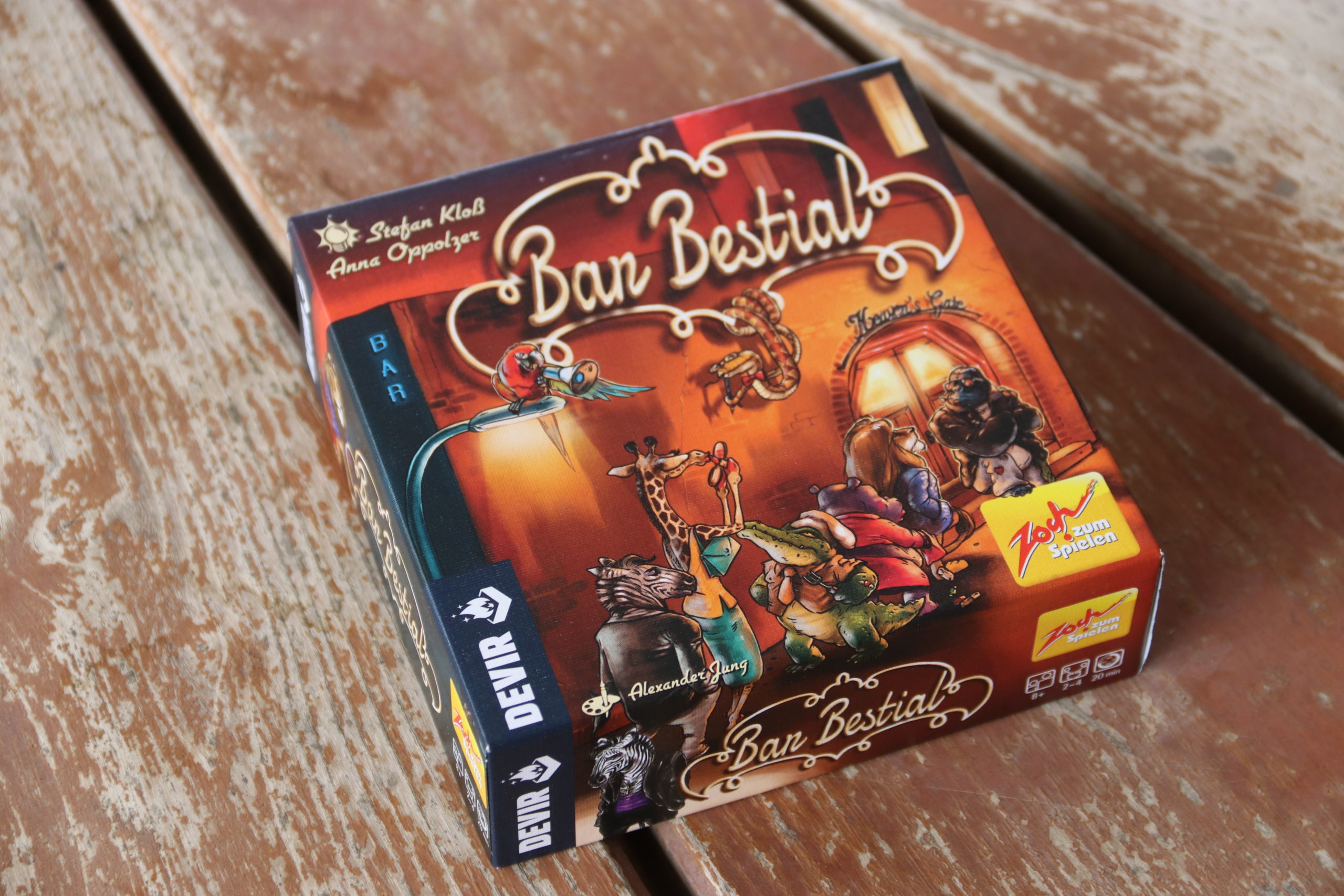 What better game than Bar Bestial to pay homage to our weekly meeting place? It is not Restaurante Navía but we will also find some very special guests.

In Bar Bestial, a game that has recently been re-released by Devir Iberia, we find a game with a small box and few cards. In fact, each player only has a deck of 12 cards. Therefore, it falls squarely into the category of “filler” type games, or what is the same, perfect to fill gaps between games or, in the case of KLEFF to initiate new players, since the games will not last much more than 20 minutes.

Let’s put ourselves in context. As the name of the game indicates, the theme revolves around a bar, but not just any bar, but the Bestial Bar, the trendiest joint in the animal kingdom. It is so fashionable that there are long queues to get in. So, the aim of the game is to get into the bar and for this we must play the cards we have in our hand, each of them corresponds to an animal with a special ability that will be executed at the time it is played. Only the most clever animals will be able to enter.

Set-up of the game

Each player will have one of the decks, corresponding to four colors (red, blue, yellow and green), with 12 different cards of animals with special abilities. It is important to keep in mind that we must manage efficiently the cards we have, since we will only have one chance to play each of the cards. The strategy, in this way, is key so that it is our animals who enter the party and not those of the other players.

To start the game, players shuffle the cards and draw 4 cards from their deck.

The playing area or what is the same: the queue to enter the joint, is where the players will play the cards. It is formed with the cards “Puerta del Cielo” and “Patada”, placed at different ends and leaving between them a space for 5 cards. In this area the entrance queue to Bar Bestial is formed.

How to play Bar Bestial?

The objective of the players in Bar Bestial is to get as many animals of their color as possible into the Bar.

To enter, there must be a queue of 5 animals. When there are 5 animals, the 2 first animals in the queue will be allowed to enter. So, we must try by all means that when the queue is completed, the animals leading the queue are ours. The fifth (and last) in the queue will receive a kick from the gorilla keeper and will go home.

It is important to keep in mind that it is not enough to make the most powerful animals enter, those with the highest number of cards, but we must take into account the score given by each animal. This score appears in a cup at the bottom margin of the card and on the reference sheet. Weak animals like the skunk or the parrot, for example, give a lot of points and can make us win a game so don’t forget about them and play them at the right time!

The mechanic of the game is very simple, each turn consists of the following phases:

1.- Play a card from our hand. We have 4 animal cards to choose from, we choose 1 of them and place it in the entrance queue. We will place it in the last place of the queue, waiting for its turn.

2.- Perform the animal: once the animal card has been played, we will deploy the effect of its ability.

3.- Execute recurring animals: some animals have the spiral symbol, this means that their ability is repeated in the following turns successively. The animals that have this power are: the hippopotamus, the crocodile and the giraffe. If there is more than one in the queue, start with the animal closest to the entrance and so on progressively, when it is possible to execute its ability.

4.- Enter to “Puerta del Cielo” or get a “patada”: as soon as there are 5 animal cards in the entrance queue, the doors of Bar Bestial open but only the 2 guests closest to the Door to Heaven will enter. The other animals will remain in the queue, except for the animal that was in fifth place in the queue, which will be eliminated from the game and will be placed on top of the card “es lo que hay”.

If there are less than 5 animal cards in the queue, the round will continue without doing anything in this phase.

The game ends when all the players have used all the animal cards, with no cards left in the draw deck or in their hand.

Who is the winner? The player with the most points on the animal cards that have made it into the Bar Bestial.

Testing it with both novice and experienced players

After playing it with various numbers of players and with different levels of playing experience, we have drawn the following thoughts:

Bar Bestial is a “filler” style card game, i.e. simple in rules, with short games and suitable for all types of players.

It has only 12 cards per player, each of them with a special ability. This is one of the most relevant aspects of the game, since depending on the players it may be difficult to understand how the game works or what synergies can be generated between them. The first game in inexperienced players has been a bit chaotic, although it must be said that the game itself has such a pretension with the cards that can generate a plot-twist. This has been the result, above all, due to not being familiar with the abilities of each of the animals and not knowing how to correctly interpret the reference sheets. On the other hand, with experienced players and accustomed to use reference sheets (we missed 2 reference sheets, 1 for each player) the game went super smoothly. It should be noted that the cards have a great visual guide, very easy to understand, so starting to play after a very brief explanation is a piece of cake.

The fact that cards with different abilities are presented adds a dose of strategy and dynamism to the game, ideal in small format games. In the case of unaccustomed players, this introduction to hand management is very interesting as they have had the feeling of doing more than just “draw and play a card”. These players have pointed out to us that saving some cards for later is interesting because, as the game progresses, players have been playing cards and playing a card when the other players have already played it can lead to placing an animal at the beginning of a queue or changing the fate of the queue. In more experienced players, the feeling at this point has been very similar: managing cards and abilities well, foreseeing the cards / actions that the other players have left, etc. is an extra point in simple games.

Fundamentally, in the games we have played, there have been two strategies to try to win the game: get the maximum number of animals into the Bestial Bar or try to get the animals with the highest score to enter. Possibly, the less experienced players have opted for the strategy of getting in a greater number of animals without taking into account the score given by each of the animals, just to have the feeling of scoring points. On the other hand, the more experienced players opt for a strategy in which the use of the cards is more thoughtful and the cards are played more conscientiously, planning for more turns. Which strategy would you opt for?

Bar Bestial is a game that can be enjoyed by any kind of player and any number of players (2 to 4). It is a game that can work perfectly as an introduction to the world of gaming and also for advanced players looking for a refreshing game between games.

It has the perfect dose of complexity to please everyone and its hand management crumb so that the strategic component convinces more experienced players. It can go to the table very easily since it does not require any deployment and it is practically shuffle the cards and start playing.

They say that experience is a degree, so novice players will probably find it hard to memorize what each of the animals does, as happens with Love Letter (you can learn how to play in this Devir’s TV video), a card game that has also been published by Devir Iberia.

Our favorite number of players is 4 players because in 2 players we will not find the chaos that characterizes the game. With 2 players it is very easy to keep track of the cards played by the opponent and to control the future of the game with relative ease. In addition, 3 players is not the optimal number, as we have detected that there can be turns in a loop in which only one player can bring in his animals.

One of the aspects that are usually taken into account to expand the collection of games is the price, let’s not fool ourselves. With Bar Bestial, we have a very versatile game at a reasonable price (16€ approximately), so there is no excuse.

We recommend it to any group of players. A good option to get started in board games or to have light options in an experienced player’s collection.