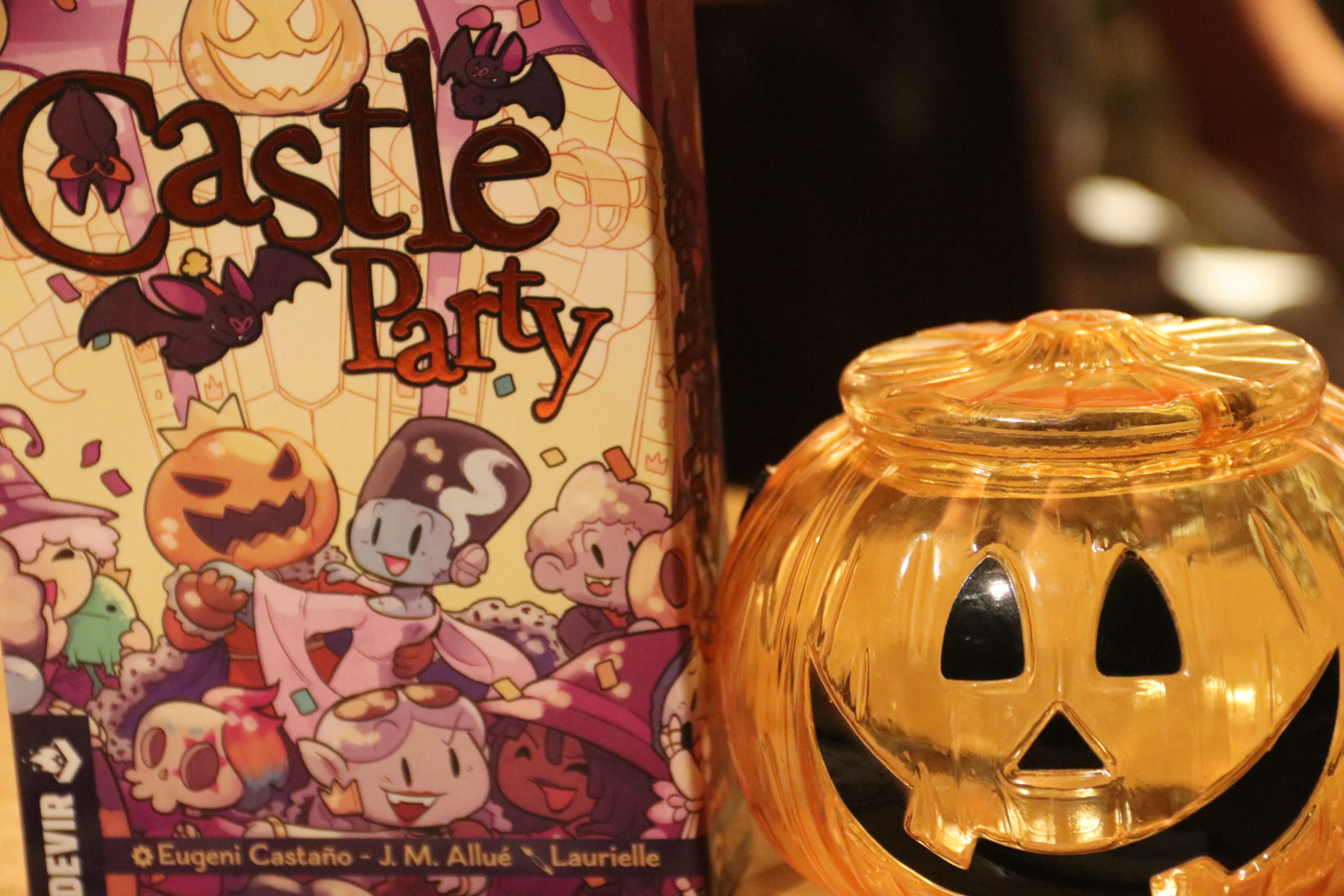 Welcome to the party that is organized this midnight at the Pumpkin King’s Castle! Don’t be scared and accompany ghosts, vampires, witches, skeletons, Frankenstein family and unicorns int this fun night.

In Castle Party, created by the Catalan authors Eugeni Castaño and Josep María Allué, illustrated by Laurielle and published by Devir Iberia, we are faced with a game with “Flip & Write” mechanics (or what you do the same: flip a letter and write , in this case draw the monster symbols). Designed for 2 to 4 players, from 8 years old and with an estimated duration of approximately 30 minutes.

What is the game about?

As we have just seen, the main mechanics of Castle Party is the “Flip & Write”, therefore, it revolves around two elements: cards and a board, or more appropriately: castle blackboards, where we will draw the elements that show us letters. One of the most interesting aspects of the game is that we will have two different decks of cards, one destined to determine the positions where we can introduce the elements (figure cards) and another destined to the elements themselves (monster, unicorn and clock cards ).

All the players will take a castle blackboard and a marker with which the game will take place.

The monster cards will be shuffled alongside the unicorn cards and three cards will be dealt to each of the players. Cards that have not been dealt will remain accessible to all players in a face-down deck, from which cards will be drawn as the players play their cards.

The face cards will be shuffled and three decks will be formed, in which a clock card will be added to each of them.

1.- Reveal a face card. The active player will reveal the top card of the deck of figures and place it in the center of the table so that it is visible to all players. When placing this card, he will choose the orientation of the figure according to his interests.

2.- Play a monster card from your hand. The player will choose which of the three cards he should play. The face card indicates with a cross in which of the positions the card should be played.

3.- Continue playing. The next player, to the left, will play a monster card adjacent to the card played by the starting player. Players will follow each other until they complete the figure and draw cards to complete their three-card hand.

5.- Draw. When the special actions have been executed (or not, at the choice of the players), it is the turn of drawing the guests on the castle blackboard. For this we will have to take into account the figure made and orientation, try to connect them with other guests from the same group to add the maximum number of points possible.

These turn phases will repeat, starting with the next player to the left, until all three clock cards are revealed and all three party events are executed.

Special actions are quite important since they can change a game. The player who started the turn can choose whether to use it or not. Let’s see what actions we have:

Finally, each time a clock card is revealed a party event will be triggered:

When the third clock appears, the game will end and we will proceed to the final score.

Testing the game with novice and experienced players

The games of the Roll & Write genre as well as all its variants, such as the one present here (Flip & Write), are very accessible for all types of players. During an era in which we have become accustomed to playing remotely, these types of games have gained many followers due to their ease of playing from home through a videoconference and for, generally, admitting a large number of players.

This proposal, the latest novelty in a game produced by Devir Iberia, offers a very enjoyable experience for players with different levels of experience and that is an achievement since on our game nights you can easily see the table.

After having tested it with different groups, we have observed that the more experienced players can play the “rave party” version directly, or what is the same: advanced rules with five meeting points inside the castle that can represent a greater challenge than the “party” version by having to take into account more boxes to choose to score more points.

Although it is true that the mechanics are exactly the same, having a reversible board with two game modes can be an incentive to give a new game a try. Starting with an accessible game mode and having the option to advance to a mode with more variations is a very positive aspect for novice players as they will have a moderate learning curve and when they master the game they will be able to play the advanced mode.

In games with novice players and with experienced players, we have found that the rules are acceptable and it is hardly necessary to consult the instruction manual or ask questions. Although it is true that in the first game that is played the use of special actions can be a bit random for the simple fact of “spending” them, in advanced players these actions have been used at the opportune momentum and have made it possible for players to add many points.

Filling the figure with monster cards is one of the most important aspects of the game, so it is advisable to think carefully about which card to play. To make good plays you have to have a certain command of space and a good vision of how the cards will fit together. The novice players have hardly programmed the plays, they have simply been dropping monster cards that more or less fit in the squares of the castle. On the other hand, experienced players, before playing a card, meditated (the dreaded analysis-paralysis) which was the most optimal space to place it in the figure and where to fit that figure in the castle.

Castle Party is a game suitable for all audiences, both by age and by experience in the world of board games. The simple mechanics work perfectly in this light-hearted title, offering an enjoyable gaming experience right out of the box.

Unlike other games of this genre, this is a game designed for games exclusively with 2-4 players. This is one of the main handicaps we have found as most Roll & Write games and the like support insanely high player numbers. This is due to the fact that there is practically no interaction between players, but rather it works as a kind of puzzle where each player must optimize their resources to get the best score.

The fact of making a reversible board available to the players with two variants, corresponding to different levels of difficulty, is quite a success. The basic mode is entertaining enough that any player can start playing through it, allowing inexperienced players to share a table with experienced players without large score differences. Ending a game and wanting to play another game of the same game can sometimes be a bit tedious, in Castle Party, however the situation of “we tried the rave party mode” can occur? It’s great to test yourself with a more advanced mode once you’ve mastered the rules of the game.

One of the aspects that stand out is the visual component, we have a super colorful box that enters by sight and draws attention with bright title letters. Laurielle, the illustrator of the game, has done an exquisite job with a lot of attention to detail both on the box, on the boards and on the different cards. Undoubtedly, the attractiveness of this game can make some players not used to playing board games choose this title for the beautiful art and then find a fun game.

Finally, we want to mention that the markers have failed in the first game, which is a major production failure. Using blackboards is a great success since it allows you to reuse them without having to use disposable sheets of paper as in other titles, but without the right tool to draw you lose enough points. It is easily solved with the use of other titles in the house (Devir Iberia) such as Plenus but it is a pity not to have the right markers from the beginning.

Animals in board games, a good theme?