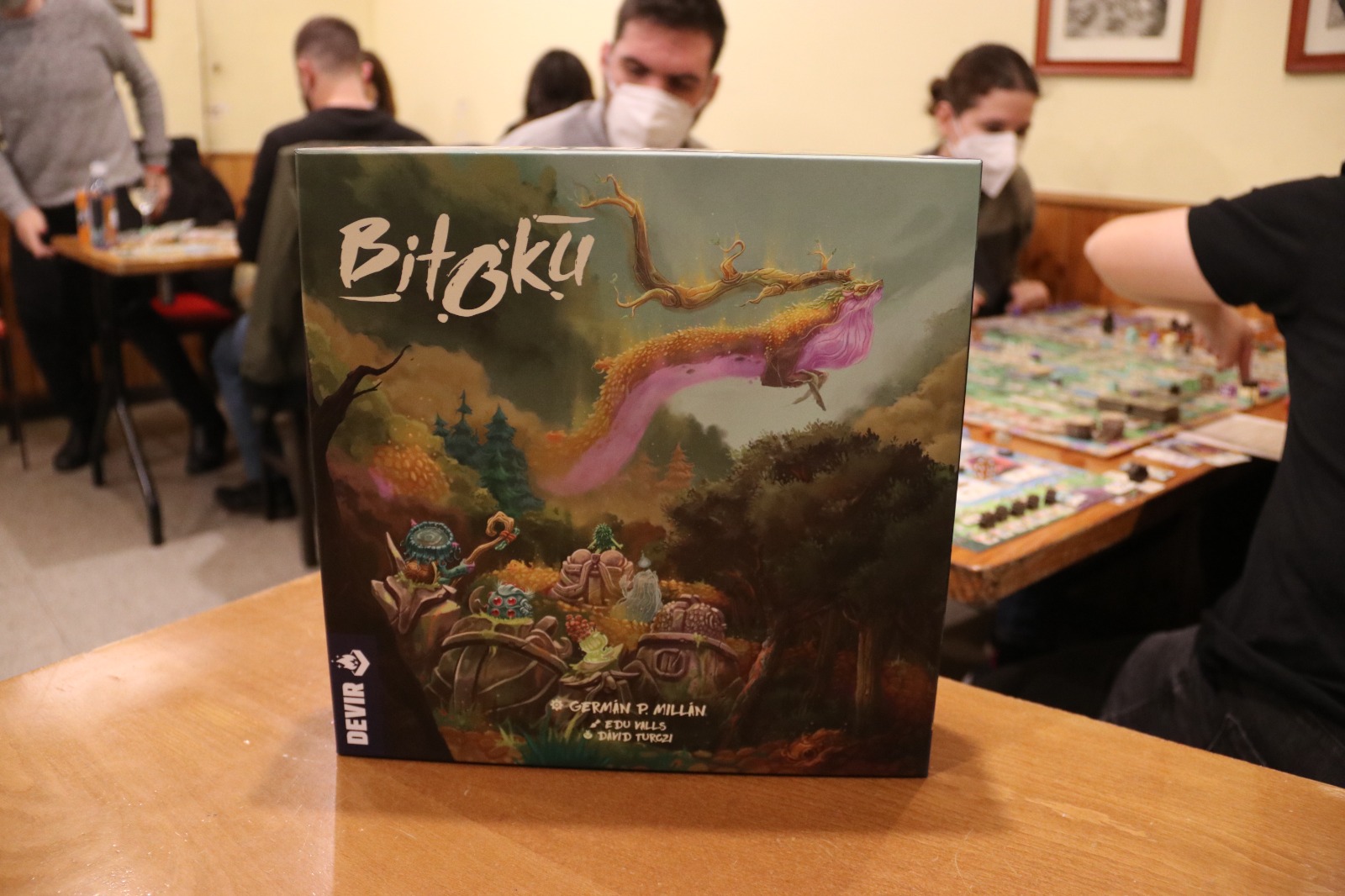 Some weeks ago we organized a demo of Bitoku, one of the latest releases from Devir Iberia, created by German P. Millán and illustrated by Edu Valls.

In total there were 4 tables that, simultaneously, learned how to play this magnificent game that was sold out in the last edition of SPIEL Messe.

We spent the night with Àlex (Jugador Inicial), who helped us a lot explaining the rules of the game and solving some doubts that came up during the games.

After having played (and making play) several times Bitoku, it’s time to talk about what we thought of it.

In Bitoku we find a medium-high weight game that because of its huge board and multitude of elements can be a bit overwhelming and inexperienced players can be a big barrier. However, the mechanics it combines are well known (hand management, set collection and dice placement) and with a good explanation any player can play it without problems.

One of Bitoku’s strong points is its iconography. Both on the cards and on the personal boards as well as on the central board we will find icons that will help us to understand the effects that unfold. Experienced players have had a very accessible first contact while less experienced players have needed to ask more to Àlex or Pau to solve doubts about the iconography.

Bitoku offers an experience in which each game will be different and each player can choose to perform any of the multiple actions offered by the game. We have noticed that less experienced players wander quite a lot on the board during the first few turns without understanding very well what to do and how to take advantage of their actions at the end of the game. On the other hand, experienced players, or players who have already played the game, plan strategies in the longer term and thus achieve much higher scores.

If we talk about its success in terms of mechanics and flow in the games, we cannot forget the excellent visual and editing work. The art stands out, being a visually beautiful game, colorful and reminiscent of Studio Ghibli productions. The board depending on the number of players is a success because it allows to make the most of the space inside the box (0% air).

100% recommendable to any player. Why? The inexperienced players have the opportunity to get a demanding title but with known mechanics that as they play it they will get a lot of juice. Experienced players will enjoy it with its multiple scoring options.

Have you ever attended a demo session? Does it help you to learn how to play a game correctly or do you prefer to read the instruction manual or watch a video tutorial?

Animals in board games, a good theme?