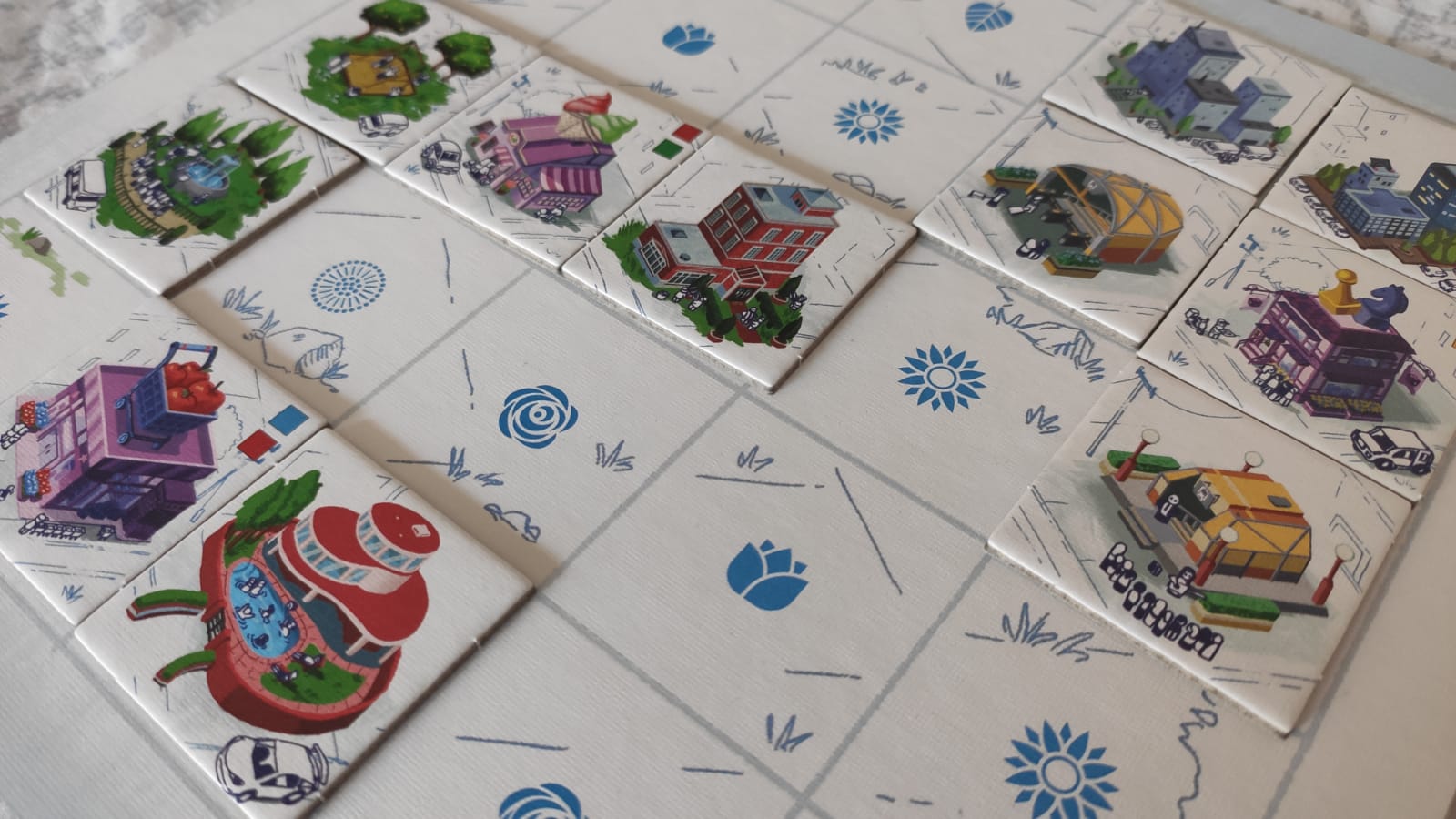 Although this July is being a bit weird, spending a lot of the day at home again due to the new outbreaks of COVID-19, we have discovered new games that we really liked. As a curiosity, three of them bear the name of a city and are closely linked to cities or civilizations

This abstract chess-like game, which was recommended in Spiel des Jahres 2018, has surprised us a lot. We have played 2 and 4 players. It is a very simple game in which in our turn we have to do two actions: (1) move and (2) build with the objective of the game being to reach one of the highest floors before the other players.

At first glance, the components of the game draw a lot of attention: plastic pieces that emulate the different floors of the charismatic houses of the Greek population of Santorini. However, even though it seems like a simple game, there is a lot of strategy behind it. The creators of the game recommend the game for 2 players but, after a few games for 2 and 4 players, we can say that it works well for any number of players. In fact, the 4-player games we’ve played have always been decided on the last turn.

An added value is the fact of offering different options to play. It can be played in a basic way, that is, without gods cards or, well, with gods cards. Gods cards add a bonus to games, add or modify player actions and increase the difficulty level. The game features 30 different gods cards so the combinations are almost endless.

An ideal game for strategy fans. Easy to learn and fast to play. It is a good introduction to games with resource management mechanics. Designed for 2 to 4 players.

This game transports us to ancient Egypt where we will have to mount the different fields on a modular board in Valley of the Nile where to collect resources to build the best city and get the favor of the gods. In our turn we will have to do the following actions: (1) place tiles on the board (following the rules of dominoes), (2) collect resources, (3) buy stores for our city and provide them with resources and (4) renew our hand with a new field card.

The strategy and the adaptation to the decisions of the adversaries are fundamental. A bad decision can change the direction of the game.

A simply great city building. The winner of the Spiel des Jahres of 1994 surprises in a very attractive implementation with colorful components that make it very attractive to go out to the table. We have only played with 4 players, so we don’t know if it works for another number.

Manhattan is not just a colorful game, it is a game in which strategy plays an important role. It is very important to make good use of construction charts and flooring pieces. The objective of the game is to master the different areas (districts / neighborhoods) that the game proposes to us. We will build a “skyline” of skyscrapers, for this, in each turn we will carry out the following actions, we will use one of the construction cards and we will place a building piece.

In Manhattan, the use of cards is coupled to the player’s position on the board so that although two players have the same cards, they will play differently.

Another game named after a city, in this case the Danish city of Copenhagen which is famous for the colorful gabled houses along the water.

In this 2 to 4 player game we will step into the shoes of designers to create the most colorful facades and be the first to reach the point goal. The game system has evoked us a bit to Ticket to Ride, due to the mechanics of using cards to “build”, with the difference that we are constructing a building instead of railroads. It is a very simple game in which in our turn we have to do the following actions: (1) draw two adjacent cards, cards that are colored and allow us to get pieces for the building and (2) optionally take pieces and place them in our building. Simple, true? As the game progresses we are going to realize that the position in which we place the pieces will have relevance since the pieces have shapes similar to those of Tetris and the lines not completed will not give us points.

Copenaghen is a fairly fast pattern building game suitable for all audiences. In addition, there is a “Roll & Write” version that turns mechanics with the introduction of dice as elements to be able to construct the building.

We close the list of new discoveries for the month of July 2020 with Bloom Town, one of the novelties of 2 Tomatoes Games of the year 2020. It is also a City Building and Tile Placement.

This time our mission as architects will be to build the coolest neighborhood and revitalize the town after a long winter. We will have to combine the different types of tiles: offices, subways, parks, homes and shops. It is a game of 1 to 4 players although we believe that the ideal number of players is 2 to squeeze and enjoy it to the fullest. In each of the turns we will do the following actions: (1) place a building tile, taking into account the combinations with the other adjacent tiles to add as many points as possible and (2) steal a new tile according to the symbol from each of the neighborhood sites (they are all flowers, we are in spring!). At the end of the turn we will get the corresponding points for having placed the tile.

It is important to do an exercise of imagination and in a certain way to program the actions since the number of tiles in each of the categories is limited.

Running away from the category of cities, another game that we have discovered and we really liked is Draftosaurus. This cute game featuring colorful dinosaurs perfectly combines different mechanics such as rolling, drafting, set collection and simultaneous selection.

The objective of the game is to get the highest score and build the coolest Jurassic Park. How do we do it? Easy: placing the dinosaurs in the different enclosures following the simple rules that each of the boards propose to us (reversible, with two levels of difficulty). In this game of 2 to 5 players the turns are very simple, the actions of each turn are as follows: (1) roll a die, each player will roll the dice in a rotating way, (2) select a dinosaur and place it; (3) pass the remaining dinosaurs to the player on your left and (4) repeat actions 1, 2 and 3.

Note: All games are language independent.

[REVIEW] “Cacao”. Paying tribute to the gods in the sweetest way!