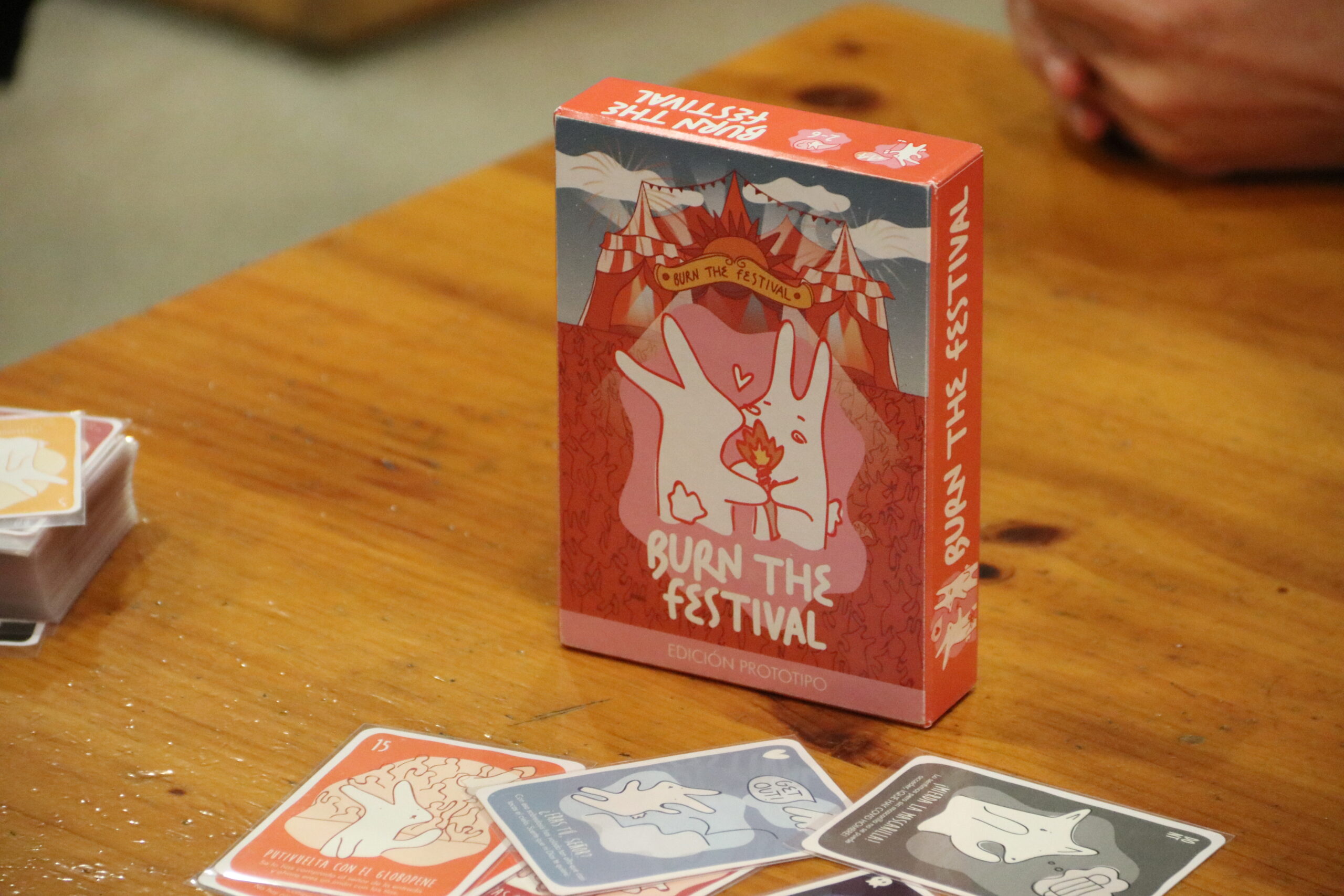 Do you like adorable bunnies and music festivals? In Burn the Festival you will find both.

Some months ago Mariona Rius, author of the game, came to present Burn the Festival, in its Pre-Prototype version, at one of our weekly game nights. Since then the game has been evolving and we can say that it is a very mature game that can offer great moments of fun. Some proposals we made in the first version were: that eliminated players can continue playing with other objectives and/or decks of cards, a card that deploys a special effect and more interaction between players.

The mechanics of the game will be very familiar to us as they are quite similar to those of games like Exploding Kittens, Virus! or Unstable Unicorns. It is a very affordable set collection in which we have to collect experience cards to be the rabbit that makes the most trouble at the festival. To do this, we will have different cards that will complicate the other players the goal of collecting the necessary cards to win. Special mention to the BTF card that is literally burning the festival and will mean automatically winning the game unless another player has the NOPE card.

One of the most striking aspects of the game is the art and illustrations, which are by the same author and has been nominated in the Illustration Contest of DAU Barcelona 2021. We have already talked about the importance of art in board games and, undoubtedly, Burn the Festival meets the objective of being a very colorful game and that surely attracts attention but ends up falling in love with its gameplay. We can not forget its casual style with very urban phrases and words like “morisión”.

A couple of weeks ago we organized the first BTF tournament in which 40 participants competed to win the crown. We counted on the presence of Mariona to explain how to play and all the secrets to get the victory. It was very popular and, although there were many people who had not tried it yet, the games were easily returned. There were even some tables that despite having finished the round continued playing while the other tables continued playing.

At the date of publication of this post it is in the middle of a crowdfunding campaign in Verkami.

In case you don’t know what a crowdfunding campaign is, we explain it to you: it basically consists of an author publishing a project he/she wants to carry out on a web platform. In this campaign, the author explains what the project consists of and how much money he needs to carry it out. Although it is assumed that the money is obtained altruistically, the most normal thing is that various rewards are established for the patrons. Likewise, it is common that if the funding is exceeded, there are stretch goals that are small additions to the project in the form of a small donation.

Come and give a little love so that the game can be published!

Sending love letters to the princess