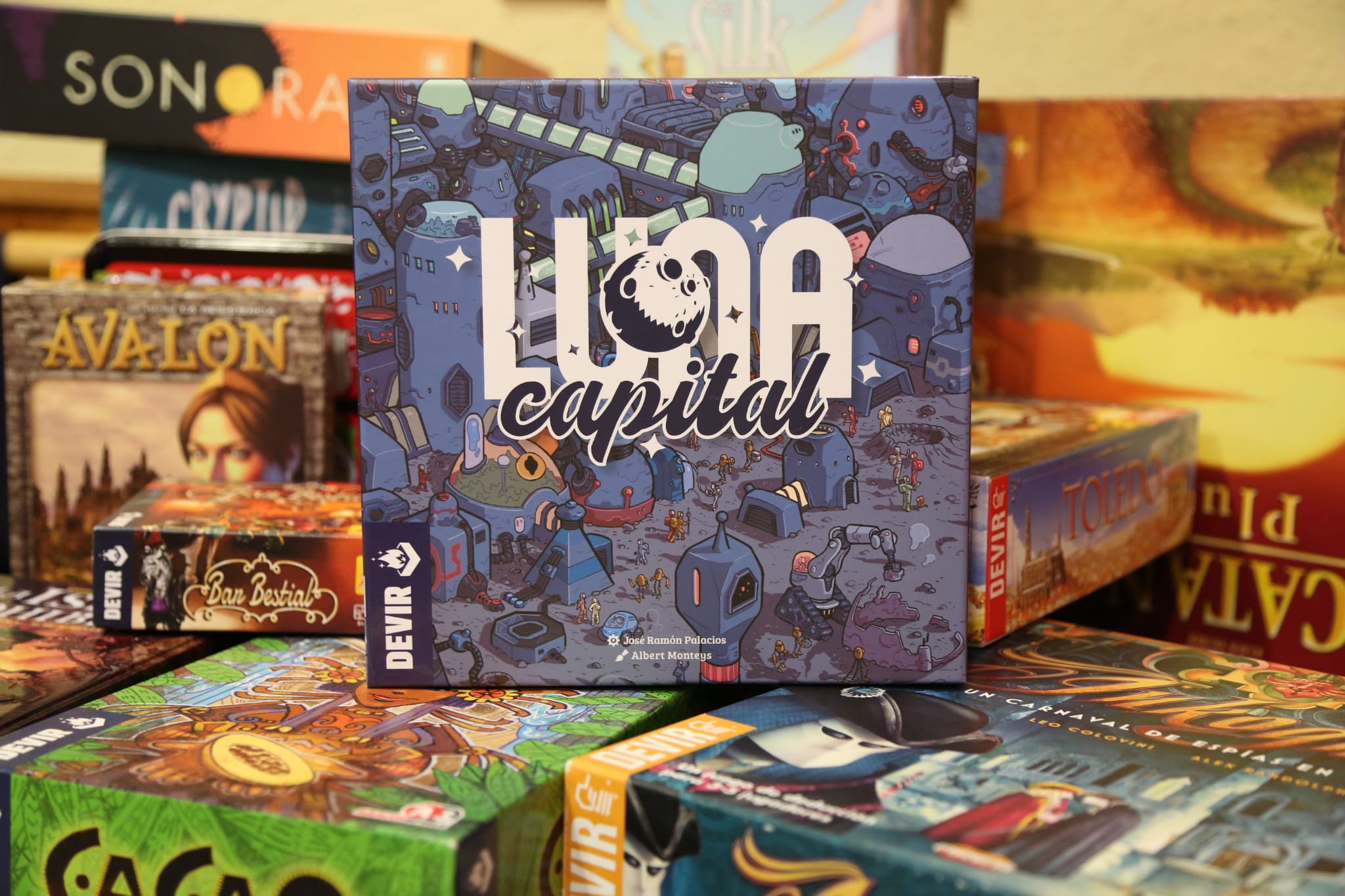 Last week we had the opportunity, and luck, to be able to present one of the next novelties in the Devir Iberia catalog as an excuse. In addition, it is not just any title but it is one of the great bets of the publisher’s own production.

The event took place at the Restaurante Pasa Tapas, the usual venue for our game nights, on October 20, 2021 in the afternoon. We have the participation of David Esbrí, editor of Devir Iberia under the watchful eye of Carles Trillo, Director of Communication and the versatile and showman Benja Amorín.

The night began with a very interesting talk about the production of board games that you can see in full at this link. David Esbrí explained to us how Devir Iberia works and what the editorial process of a modern board game is like, as well as how LUNA Capital has evolved until the final result. As a curiosity, in the initial idea of ​​the author, José Ramón Palacios, the game was developed in a theme of real estate speculation. The end result is a game with an attractive theme, the cosmic world, which fits very well with the mechanics of city building and tile laying. Much of the blame for the game being an aesthetically and visually delightful lies with Albert Monteys, a Spanish cartoonist and illustrator who is well known for having been Director of the satirical weekly “El Jueves” from 2006 to 2011 and curiously launched the comic ¡Universo!, which also revolves around the cosmic and space theme a couple of years ago. We cannot forget the excellent editing work by Meeple Foundry, a Spanish company dedicated to layout and translate board games with great affection.

Then, after the talk, began what will have been, worldwide, the first LUNA Capital tournament. 10 tables, 4 players per game. A total of 40 participants gathered to try to create the best lunar colony and take one of the copies home. There were players who had already read the instruction manual before coming to the event, while others did not even know what the game was about. Luckily, Jugador Inicial was there to help us out. And Pau, microphone in hand, explaining how to play at several tables at the same time. It looked like bingo. In total there were 3 tournament rounds, the last one being a true final with a lot of tension that was resolved by just five points of difference between the different participants.

During the night there was a costume contest, following the characterization of the different sponsors (characters) of the game: Astro Burger, Moon Paradise Real Estate, Luna Taxi and Space Royal Cruise. Although there was not much participation, the costumes of those who did were very original.

After having played it many times and having seen players with different levels of experience, we draw the following conclusions:

The game has an excellent production, the art is superlative. The tiles and various components are of superior quality. Also, everything fits perfectly in the box (there is no air in the box). In fact, the insert itself already indicates how to place the different components to optimize space and keep everything in its place.

It is a quite demanding game if we want to obtain high scores since there are many ways to score. However, inexperienced players will be able to enjoy it without problem since the learning curve is low-medium. Of course, it is convenient to familiarize yourself with the different icons of the tiles since some of them can give rise to some confusion because they look a bit similar to each other.

It shines compared to other games with similar mechanics. We recently tried a fairly similar game and the experience was not entirely satisfactory, but in LUNA Capital everything flows smoothly, which results in a very satisfying experience for all types of players.

The first games can be a bit long as you have to understand the mechanics and how to score well. We have been able to observe that, for example, in the tournament, the first game lasted practically an hour and a half while the second and third only 30/40 minutes to 4 players. Although the first game is a bit long, we think that it is a suitable game for all types of players since after the first introductory game, the game is easy to understand and the turns follow one another in an agile way.

Our online tournaments are back!