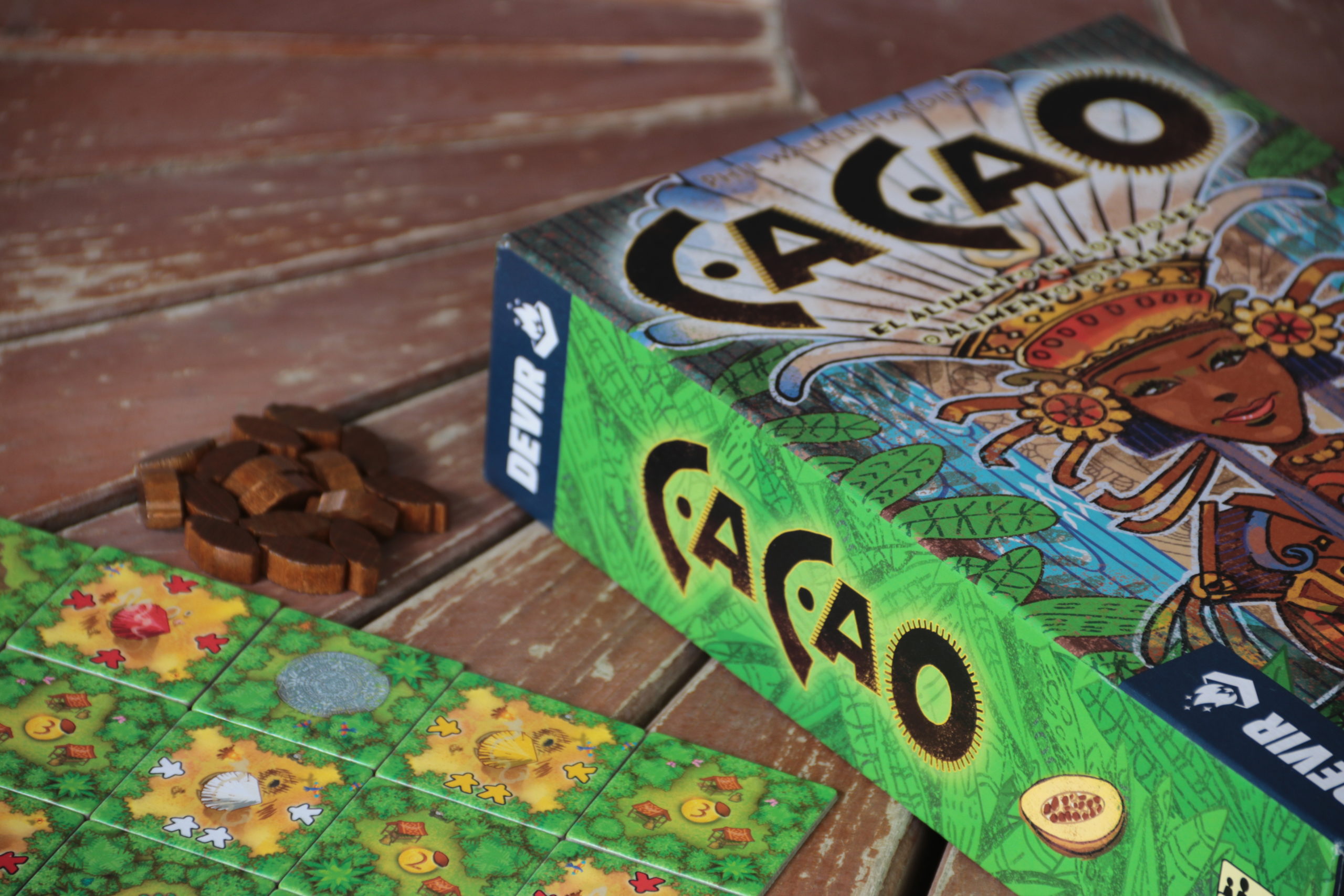 Any chocolate fans around here? If you are a fan of this delicacy, you will surely enjoy “Cacao: El Alimento de los Dioses”, a family game in which we play the role of the chief of a tribe with the mission of fulfilling the desire of the gods, cultivating and selling the cocoa we have collected.

What is the game about?

Cacao is a game of tile placement and element activation, published by Devir Iberia. As we place tiles, we will explore the jungle and different tiles will be revealed, such as cocoa plantations, markets, temples, water cenotes or solar worship centers that will allow us to obtain victory points or perform certain actions.

Its mechanics are very attractive and accessible to any type of player, since the effects of the jungle tiles will be executed by using the collector tiles (the ones that each player will have), which will be the ones that will allow us to perform different actions.

The collector tiles and the jungle tiles will alternate, so that no two tiles of the same type will ever be placed adjacent to each other, but only diagonally. When a new collector tile cannot be placed, what is called “jungle space” will occur, which is generated when there are at least two diagonally adjacent collector tiles and one of the orthogonal spaces shared by both tiles is empty.

The game will last exactly the same number of rounds as the number of collector tiles the players have, varying according to the number of players: 11 for 2, 10 for 3 and 9 for 4.

1.- Place a collector tile. The player will place one of the collector tiles from his hand adjacent to one of the jungle tiles.
2.- Fill jungle spaces. If when a collector tile is placed one or more jungle spaces have been generated, they will be filled with explored jungle tiles (the ones that are revealed).
3.- Activate the jungle tiles. The action of the tile will be executed, depending on the number of collectors of the tile played by the adjacent player. We can obtain cocoa, sell cocoa and get coins (victory points), advance position in the water track, get a moonstone tile or choose to have a majority of collectors in a temple.
4.- Drawing a collector tile. The turn will end by drawing a new tile from the player’s deck to complete his hand.

The game will end when all players have placed their collector tiles and the final score will be made:

1.- Coins accumulated.
2.- Number of points of the river in which the meeple water carrier is located.
3.- 1 point of victory for each moonstone.
4.- Evaluation of the temples. The player with more collectors in a temple will get 6 points, the second will get 3 points. In case of a tie, the player with more cocoa units will win the majority.

Testing it with both novice and experienced players

Undoubtedly, if we talk about tile placement games with a modular board, it is impossible not to compare it with Carcassonne, a classic also published by Devir Iberia and that this year 2021 celebrates its 20th Anniversary. This mechanic is ideal for introducing new players and will also be enjoyed by more experienced players due to its high dose of replayability.

One of the aspects that can stop a new player to give a chance to a new game is its duration. In Cacao we find a game with a duration of about 45 minutes, which can be reduced considerably if the players know the game and take turns quickly. In this way, we have a contained and, in a way, programmed duration since the players will know at all times that the game will end when their tiles are finished.

It is important to note, as we have just pointed out, that the novice players with whom we have played have neglected some of the options offered by the game, such as, for example, going up the river with the meeple water carrier. Let’s not forget that all players start with a negative score. The scarcity of this resource should mean going for it as soon as its tile is revealed and placed. In the games we have played, this resource has had a relevant weight and it is essential to find a good balance between all the resources to make a good final score. Perhaps, the more experienced players have a better global vision and control more easily all the variables offered by the game.

Cacao is a game that works well with any type of players, beginners and more experienced, and with any number of players, from 2 to 4. However, its optimal number of players is 3 to 4 players because with 2 players there will be too much control over what happens on the playing field, being able to look beyond the current turn, while with 3 and 4 players it will be necessary to make decisions on the fly and, likewise, the control of the temples will be decided almost to the millimeter.

The game revolves around the activation of the tiles and it is necessary to manage them efficiently, especially with regard to the activation of the planting tiles. In some cases it has happened that plantation tiles are activated when the warehouse is full or, in the same way, activating market tiles without having cocoa and wasting a turn. We have found this situation especially in novice players who focus their strategy around planting / harvesting cocoa and selling it, leaving aside other tiles and scoring possibilities.

The game has enough depth to appeal to all kinds of players despite its simplicity. It is not only about placing tiles and exchanging cocoa for gold coins but we have to try to advance the track of the meeple water carrier to avoid getting negative points or try to get the most in the temples that will appear as the game progresses.

It seems to us a very good option to introduce novice players to more advanced games than the typical fillers, without being an excessively complex game. Experienced players will also enjoy a game with enough strategy to see the table relatively often without becoming repetitive.

What are you playing these first months of 2022?