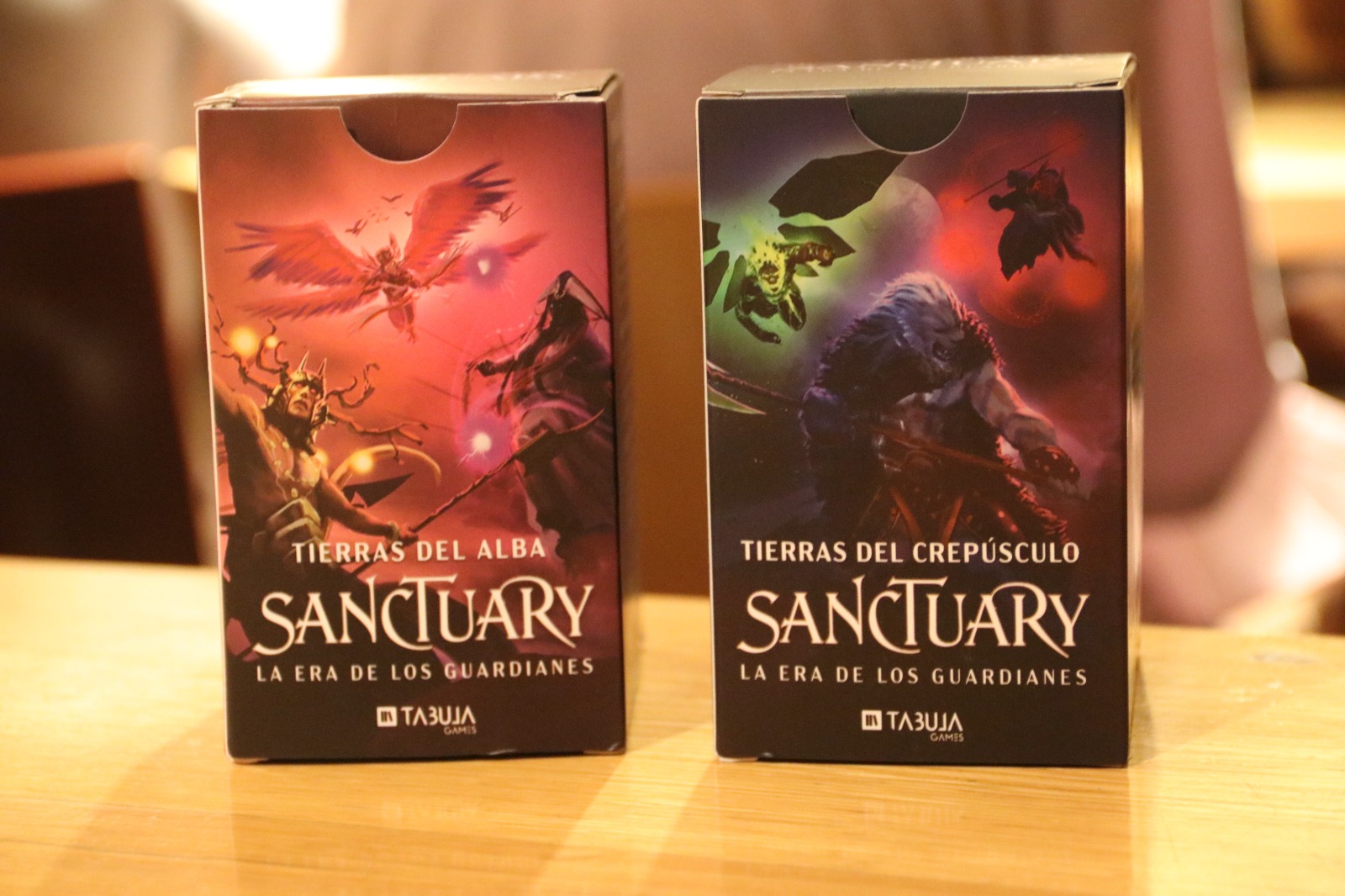 Do you like hand management games? Sanctuary: The Keepers Era is a very interesting proposal brought to Spain by the recently created publisher Bumble3ee Interactive after successfully passing the Kickstarter crowdfunding campaign with a total of 7345 backers.

The version released by the publisher offers six different decks, each corresponding to a different faction, spread across two separate packs, “Lands of Dawn” and “Lands of Twilight”, illustrated with over 135 stunning artworks by international artists.

To put us in context: according to the legends of Elnerth, a powerful mystical energy was flowing dangerously through the world. To prevent catastrophic events that would endanger the future of existence, this energy was divided into six parts called Essences. The only way to channel the power of the Essences will be through the sanctuaries, protecting them will be our mission as players and we will take the role of the Guardians of each of the factions. We will have to fight against the other Guardians to protect the Sanctuaries against rival threats. Thus, the objective of the game is to destroy all the opponent’s Sanctuaries, in order to become the only Guardian capable of shaping the destiny of the world through its Essence.

Before explaining how the turns and games develop, it is important to know the type of cards that we will encounter:

In Sanctuary there are four types of cards: Acolyte, Champion, Ritual and Sanctuary.

A player’s turn is divided into four phases:

The first player to eliminate all opposing Shrines wins the game.

Testing the game with both novice and experienced players

In Sanctuary: The Keepers Era we find a fairly accessible game for all types of players. While it is true that card games with a lot of text on the cards can be a major barrier for inexperienced players and little given to continuously read what each of the cards indicates, in this case it is solved in a masterful way with a quick guide.

The symbology and the quick guide are the perfect complement for inexperienced players or for the first games. It will only take a few minutes for players to understand the meaning of each of the drawings and for the game to flow.

Sanctuary: The Keepers Era has reminded us quite a lot of Magic: The Gathering, as several players have also told us, so the mechanics of managing the cards in a deck are easy to understand for all players. It is true that players less accustomed to this type of game have required some assistance during the game to be able to correctly deploy the effects of the cards and liquidate the enemy units and Sanctuaries. On the other hand, the more experienced players quickly picked up the (fast) rhythm of the game, planning and executing the actions quickly with little or no analysis-paralysis.

The games have developed with a contained duration which has been a success because they have left you with the feeling of wanting to play one more game. And so it has been. At the end of the games the players have asked to play the revenge game, but now with the concepts assimilated everything has flowed faster.

Undoubtedly, this is a game that without having invented anything new will provide great moments of fun for those who want to play a good game exclusively for two and who want to escape from the classics.

The fact that it is a game of direct confrontation is very interesting because there are times when some players like to test themselves against another player. In Sanctuary: The Keepers, the battles are very evenly matched regardless of the faction we choose, although it is advisable to become familiar with the deck with which we are going to play to get the most out of it. It has happened to us that the first test games we have played, to learn how to play, we did not know well what cards we would find and the strategies have been conspicuous by their absence. Therefore, we would recommend to take a look at all the cards, read well what each unit does and then start a game.

One aspect that has seemed to us a success is the fact that the factions can be combined with each other, that is, we can create unique decks with cards from different factions. A valid deck must contain exactly 28 cards between Acolytes and Rituals, plus 1 Champion that stays out of the deck. You can play with a standard Faction deck, consisting only of specific Faction cards, or you can build a deck with all the cards in your collection. In the former case, consider a limit of 2 copies of each card at most. In the latter case, you can choose only a single copy of each card. This option is sure to appeal to experienced players who want to create the invincible deck.

Have you tried it? What do you think? If you want to try it, you can do it on our game night!

Playing as a couple, you will fall in love!