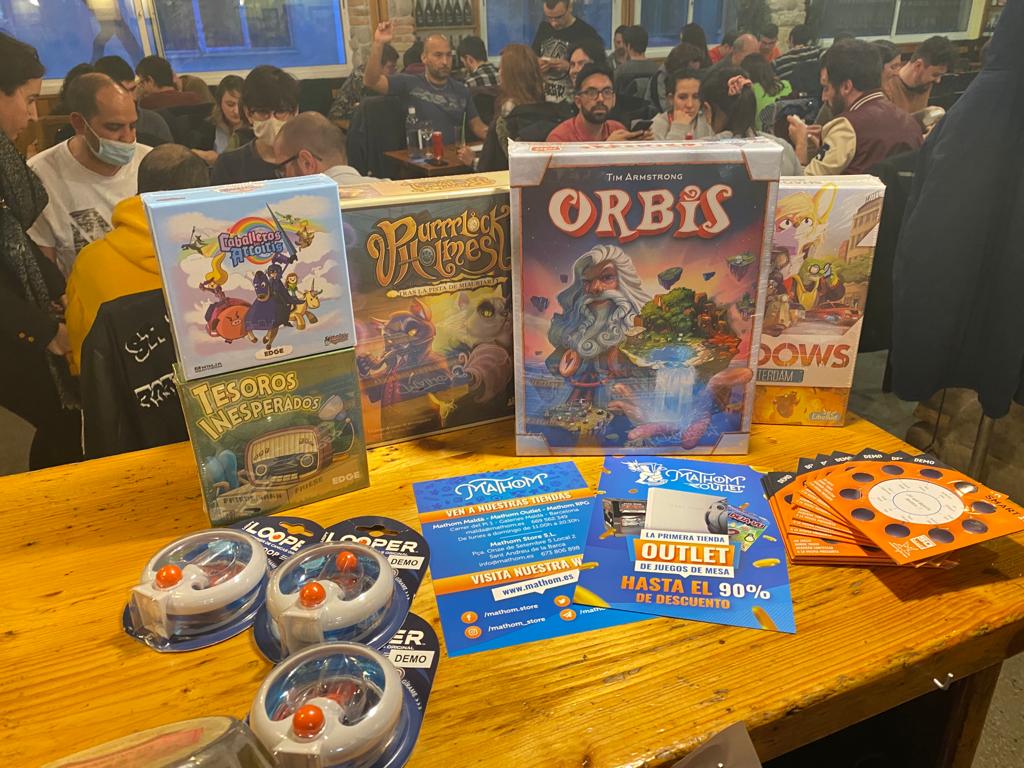 April 11th is International Game Day and we wanted to celebrate it in a special way, so together with Mathom Maldà we prepared a different game night.

Clàudia from Mathom made a selection of games from publishers Asmodee and Edge Entertainment with games fresh out of the oven and some already part of many game collections:

💭 When I Dream: a game in which you have to help the Dreamer by giving him clues about the dream before the naughty spirits mess it up.
💣 Galeones, cañones y doblones: a very fun game about rolling dices combined it with a rich scenario deck to make each game play differently. Each round, the players battle it out with merchant vessels and other ships, trying to grab as much loot as possible.
🧚‍♂️ Fairy Tale: players use card drafting and simultaneous action selection to score points while interfering with other players’ ability to do so.
✏️ Dixit: Each other player selects the card in their hands which best matches the sentence and gives the selected card to the storyteller, without showing it to the others.The storyteller shuffles her card with all the received cards. All pictures are shown face up and every player has to bet upon which picture was the storyteller’s.
🐺Lupus in tabula: Werewolves haunt the secluded village known as Tabula: every night some villagers turn into werewolves and slaughter an innocent victim to satisfy their hunger. Surviving villagers gather every day to discuss the problem: at the end of the discussion, they lynch one person among them, thinking he could be a werewolf.
🏘️Lupusburg: This game keeps the theme and part of the mechanism of the famous party-game precursor Werewolf, but this time it’s for 3-8 players.
🛵 Moto Gp: The circuits are divided into squares, and players will advance their bikes through the speed charts. Each card indicates the cells to move. But beware of the curves, overtaking and braking and will cause damage to the bikes, not some cards allow you to use and can remove you from the race.
📢 Voces en mi cabeza: players step into the courtroom and into the mind of a man on trial for robbing a bank. One player takes on the role of the prosecutor who is trying to convict the defendant, Guy, and send him to prison; everyone else takes on aspects of Guy’s personality, such as Honesty or Selfishness, and attempts to influence the trial. To win the game, each player must achieve their hidden goal. Each round, the prosecutor plays a trial card to present evidence, call witnesses, or grill Guy on the stand. Players then try to control Guy’s actions by deploying control markers to a three-dimensional game board representing his brain. These actions will sway the jury in different ways and ultimately determine whether Guy goes free or is sent to prison.
🕵️Sospechosos Inhabilituales:  one player is the Witness and the other players play the part of the Investigative Team. The Witness knows the real identity of the Guilty and tries to make the Team hit it only with his answers. The Team asks questions to the Witness and, depending on his answers, will exclude the innocent suspects after players have discussed what they learned.
💎 Splendor: game of chip-collecting and card development. Players are merchants of the Renaissance trying to buy gem mines, means of transportation, shops—all in order to acquire the most prestige points. If you’re wealthy enough, you might even receive a visit from a noble at some point, which of course will further increase your prestige,
💬 Imagine: More than one thousand items from all walks of life can be guessed through the use of 61 transparent cards in Imagine, whether they’re placed next to one another or superimposed. Almost everything in the world can be represented by a simplified concept — just don’t speak while you’re playing…!
and many more! 🎉

The occasion deserved it so we got to work and took a few mechanics from well-known games like 🎨 Dixit, 🕵🏻 Sospechosos Inhabilituales, 🔪 Asesinato en Hong Kong and 🗝️ Incómodos Invitados. We put them in a blender and out came an escape room in which you were getting clues to solve the puzzle or escape room in which we had turned the game night. Taking these games as a base, nothing could go wrong, right?

This cocktail consisted of collecting clues as you tried different games. These clues referred to one of the three pieces of evidence to be found: murder weapon, crime scene or murderer.

It was a game inside a game and the sensations were very good and it was a challenge to link the clues while playing the different games. We had a great time! We have received very positive feedback and there are some things to polish up but for the next special game night we do, there are sure to be many surprises.

Do you like deduction games? In this link you have information about games to prove you are the best detectives.

This event has been possible thanks to the collaboration with Mathom Maldà, one of the reference board game stores in Barcelona. It is located in the Galeries Maldà, a space where you will find all kinds of geek stores like Harry Potter, Pokémon, Game of Thrones, Dragon Ball or One Piece. They have three locations: latest releases, outlet and role-playing.

As if the special game night with prizes wasn’t enough, we are raffling off a copy of the Orbis game on our Instagram account. If you want to participate, you have the link here. Best of luck!

Board Games Strikes Back!