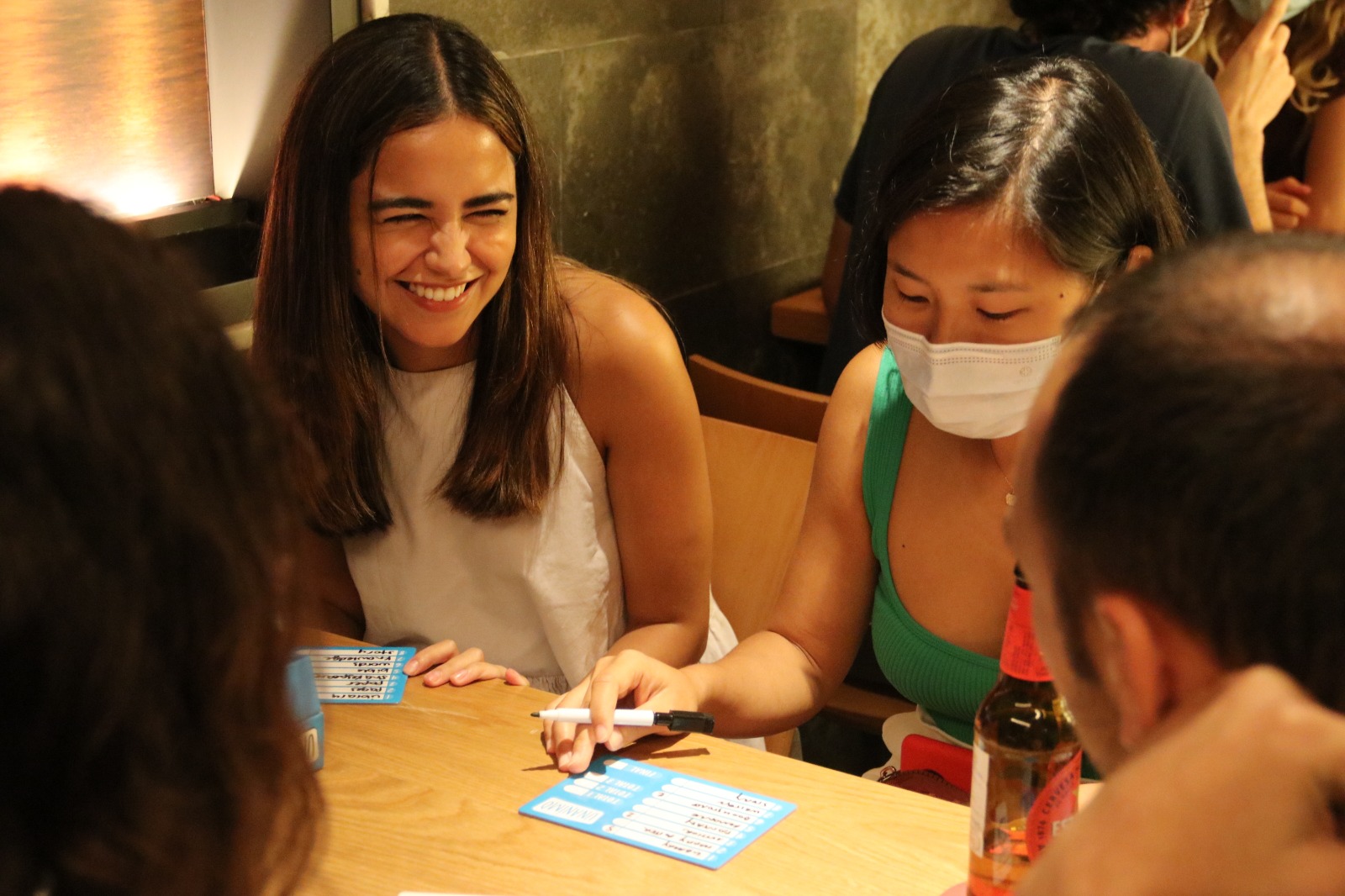 Hello everybody! After a few weeks in our new home, the Pasa Tapas Restaurant (Carrer del Dr. Aiguader), it is time to tell you about some games that we have been playing a lot in recent weeks. Let us begin!

The Spanish publisher together with Brain Picnic Games has brought us a game whose first edition dates from 1990 but which had not yet been published in Spain.

We are facing a Party Game that is very accessible to all audiences and that its main mechanics revolves around words. The objective of the game is to identify the 8 words that we think the other players will also identify and that are related to the word (and picture) of the card that we just turned over.

One of its strengths is the fact that it is especially suitable for practicing a language. In our game nights we have played it in English and Spanish, and even both languages ​​simultaneously. Being designed for 8 players, it becomes a very interesting option for large groups. If you want to discover other proposals for XXL groups you can see this post.

As a curious fact, the illustrations have the same style as Roll to the Top, one of the latest games from the same Zacatrus publisher.

We just mentioned a perfect game for large groups, so we will mention another one: Tranvía Mortal.

A proposal from Asmodee that will force us to make difficult moral decisions. The tram cannot stop and has to take one of the two tracks, running over whoever is on the way.

The game is played in two teams and we have to convince the driver which way to steer the tram. A very fun party game with its carefree style and illustrations with their own personality.

One of the classic modern games. If you do not know it, here you will find a game with tile placement mechanics very accessible for all ages and levels of experience.

The object of the game is to get the highest score by trading cocoa by placing meeple tiles adjacently.

If you want to know how to play and what we thought you can read our review in this post.

Despite the fact that there was a season that did not go out much to the table, these last weeks he is not missing his appointment with new gamers. Yes, it is one of those games that we always suggest to start a game night, for those players who come to see us for the first time or to have a quick game.

Simple rules, spikes between players, calculation and deduction to try to anticipate the plays of the other players and contained duration This is his formula to make it work so well. If you have not tried it yet, we recommend that you try it immediately, you can do it in Board Game Arena for free.

If there is a game that almost everyone knows, it is Dixit. Its game system is basically to choose cards related to a concept and to choose which one is closest. However, for somewhat more advanced players it is likely that they will fall short and look for other options in their collection. A very interesting option is Musa, a board game that shares its good visual taste (here we talk about the importance of art in board games) but adds deduction mechanics, typical of games like Código Secreto.

What makes the game different (and cool) is that we have two decks of cards: one corresponding to the artwork cards and the other corresponding to the inspiration cards. The latter are the ones that give the game added value since they will be the mini-challenges that we will use to score points and they are as varied as humming a song, mentioning a television program, saying a number or drawing a figure with a finger in the air…

And you? Which games are you playing?